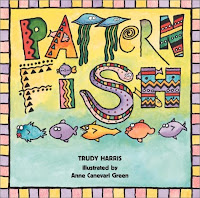 Although there's not much of a story line in this appealing concept book, there is definitely more here than initially meets the eye. The rhyming prose and brightly colored cartoon fish inhabit a world of patterns, beginning with the simplest AB pattern and growing increasingly complex. Upon closer inspection, the patterns can be seen echoing throughout, as pictures both express and reinforce the pattern of the words. For example, the ABB pattern introduced by an eel is echoed not only on the creature's body (stripe-dot-dot), but also in the bubbles that issue from its mouth (large-small-small), the underwater reeds (short-tall-tall) and plants (curve-star-star), and borders of the page (yellow-red-red). Once children get the idea, they will enjoy discovering the repetition and looking for examples. A clear and effective teaching tool.
Posted by Mrs. Nguyen at 3:37 PM

Welcome to my "Artopedia;" my online database of classroom books! Each of my books is tagged by artist, theme, topic, or potential classroom uses. To visit my teaching blog click here.
As I write lessons that incorporate these books, I'll link to them in the book descriptions.

Mrs. Nguyen
Hi! My name is Melinda and I'm a 7th year elementary art educator, a blogger, a TpT'er, an educational entrepreneur, an organization enthusiast, a lover of all things rainbow, a wife, and the mother of Brody, Kade, and Olivia.